A case study of administrative gaps in disaster management 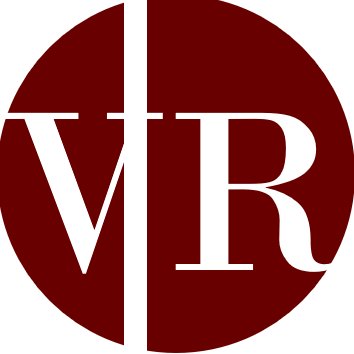 1. Overview
Critical failures in Sri Lanka’s governance are often ascribed to critical problems in policy, regulations and legislation. Consequently, addressing these three problems has often been the major focus of interventions. This case study identifies a fourth problem that is foundational for Sri Lanka: the problem of weak administration. It accordingly focuses on Sri Lanka’s administration of disaster management. It may, however, be a window to other areas of administration as well.

1.1. The global context
The Global Risk Report published by the World Economic Forum ranked extreme weather events as the number one risk faced by the world for three consecutive years; 2017, 2018 and 2019. The report in 2019 ranks extreme weather events, the failure of climate change mitigation, and natural disasters as the top three global risks in terms of likelihood, and three of the top ten risks in terms of negative impact.1
The Germanwatch Global Climate Risk Index, which assesses the impacts of extreme weather events for 183 countries, ranked Puerto Rico, Sri Lanka and Dominica as the top three most affected countries in 2017.2
The term ‘disaster management ’is used to refer to risk- mitigation frameworks that are intended to mitigate the destructive impacts of natural, man-made, technological and biological hazards.

1.2. The Sri Lankan context
Floods, droughts and landslides, the three most common natural disasters that occur every year in Sri Lanka, affect the lives and livelihoods of a large number of people. According to available data, around 1.98 million people were affected annually by floods, droughts, and landslides between 2009 and 2018.3 The economic losses from disasters in Sri Lanka for the period 1998-2017 is estimated to be around 0.3% of GDP annually.4
Following the country ’s most devastating natural disaster, the 2004 tsunami, Sri Lanka enacted the Disaster Management Act, No. 13 of 2005 (DM Act).5 The Act laid the foundation for the disaster management framework in Sri Lanka. The framework’s aim is to ‘protect human life and property of the people and the environment of Sri Lanka from the consequences of these disasters.’6
The high risks and high impact that Sri Lanka faces makes it particularly important for the country to have a well-designed disaster management framework, and have it implemented effectively.

Findings: The investigation found two key administrative failures in the NCDM that are undermining disaster management in Sri Lanka:

1. The NCDM did not convene to make decisions; and
2. The NCDM neglected its critical responsibilities.

1.4. Administrative failure
This case study finds that successive governments failed to administer the provisions of the existing disaster management framework in Sri Lanka.
The lessons from this case study can be generalised to other sectors as well. Similar patterns of administrative weakness are evident in several other sectors in Sri Lanka, ranging from waste disposal and electricity generation, to environmental protection and national security.
It implies that every year in Sri Lanka, lives and livelihoods are lost – sometimes with crippling impact on the economy –not due to the absence of legislative, regulatory or institutional frameworks, but due to the failure to administer the frameworks already in place.
This case study suggests that in Sri Lanka, while much time is spent on introducing new laws, regulations and institutional frameworks, the critical gap in governance that needs to be addressed is the deep-rooted problem of administrative weakness and failure.

2. Key findings
The NCDM is the apex body within the disaster management framework. It is responsible for approving disaster management policies and plans, ensuring implementation of programmes, and responding to emergencies (refer Annex 1 for a detailed list of key functions of the NCDM). It is the body that directs, coordinates and monitors the activities of the key institutions that administer the disaster management framework. These institutions include: (i) the Ministry of Disaster Management, (ii) the Disaster Management Centre (DMC), (iii) the Meteorological Department, and (iv) the National Building and Research Organization.8

The President and Prime Minister of Sri Lanka serve as the Chairman and Vice-Chairman of the NCDM respectively. The remaining members include relevant subject matter ministers, the opposition leader, representatives of the opposition and provincial representatives.9 Thus, the NCDM is an embodiment of the principle ‘all of government representation’ advocated for by the Sendai Framework for Disaster Risk Reduction. This framework was one of the main agreements endorsed following the 2015 Third UN World Conference on Disaster Risk Reduction (WCDRR).10

There are two main findings: (a) the NCDM did not convene to make decisions; and (b) the NCDM neglected its critical responsibilities.

2.1. The NCDM did not convene to make decisions
The DM Act provides the NCDM with the unique and overarching responsibility and ability to approve plans and make decisions in relation to disaster management.

The information collected from the RTI investigation revealed that there were two critical ways in which the NCDM failed to make decisions: (a) by failing to convene as statutorily required, and (b) by failing to have a decision making quorum at meetings.

2.1a. NCDM failed to convene as statutorily required
Section 5 (1) of the DM Act states that the NCDM ‘shall meet as often as may be necessary, but not less than once in every three months’. This means the NCDM is statutorily required to meet at least four times a year. Therefore, since the DM Act was certified in May 2005, up until December 2018, it should have met at least 54 times.11
The RTI-based investigation revealed that the NCDM met 13 times up until December 2018 –75% less than the statutorily required minimum. There is not a single year in which it had met the statutorily required four sittings. The NCDM failed to meet even once in 2006, 2008, 2014 and 2016. Furthermore, it met only once in 2005, 2007, 2009, 2010, 2012, 2013, 2015 and 2018. There were 31 disaster events recorded in Sri Lanka since the inception of the NCDM. However, the NCDM has met only 13 times, during which only nine of these disaster events were discussed.12

This failure to convene is despite the fact that according to section 5 (3) of the DM Act, the absence of the Chairman (i.e. the President) and the Vice Chairman (i.e. the Prime Minister) is not an impediment for convening meetings. In the absence of both the President and Prime Minister, the Council members present at the meeting can elect a fellow Council member to preside over such meetings.13

2.1b. NCDM failed to have a decision making quorum
According to section 6 (1) of the DM Act, NCDM meetings require at least one third of the Council’s members to constitute a quorum.14 The Council has 43 members, therefore, at least 14 members are required for the NCDM to function. The RTI-based investigation yielded attendance lists for 10 of the 13 meetings of the NCDM. Of these 10 meetings, only six had the number required for a quorum.

Even in the six out of 13 meetings in which the NCDM met, when there was a quorum, a number of the Subject Ministers (who are the Members, and can support and ratify decisions at cabinet level) were not present in person. Instead, they were represented by Deputy Ministers, Additional Secretaries and other government officials, who attended the meetings on their behalf.

2.2. The NCDM neglected its critical responsibilities
According to the DM Act, the NCDM is expected to take ‘all steps necessary to counter any disaster or impending disaster.’15 It is the body that is empowered to follow up on plans and actions of the Disaster Management Centre (DMC), and designated authorities such as the Ministry of Disaster Management (MDM) and the Meteorological Department (refer Annex 2). The proper functioning of all these institutions is critical for implementing disaster management initiatives; and the NCDM is the authority to which these institutions are accountable in the area of disaster management plans and activities.
Therefore, the failure of the NCDM to convene, even at the minimum required frequency, can easily have a cascading impact – resulting in the failure of advance preparation and planning to reduce and mitigate disaster events. Two critical consequences of this pattern of failure, (i.e. failing to convene, and failing to have a decision- making quorum at meetings) are: (a) the chronic delay in critical approvals; and (b) stalled implementation.

2.2a. The NCDM chronically delayed critical approvals
Extended gaps between the meetings of the NCDM have led to chronic delays in finalising key strategic pathways, for which the NCDM is accountable.

For example, according to the overarching strategy document ‘Towards a Safer Sri Lanka, Road Map for Disaster Management 2005 –2015’, the formulation of the (i) Overall Policy, (ii) National Disaster Management Plan (NDMP), and (iii) National Emergency Operations Plan were to be completed within two years. This Road Map was published in December 2005. Therefore, the above actions/approvals were due by December 2007 at the latest. However, the Overall Policy and the National Disaster Management Plan were completed only in 2010 and 2012 respectively. Moreover, according to the meeting minutes of the NCDM, not even a draft version of the National Emergency Operations Plan has been presented to the NCDM for its approval at the time of writing this brief.

The minutes obtained through RTI requests reveal that Action Plans of the DMC got approved only after much delay. In certain cases, by the time approvals were obtained, the planning cycles had already passed. For example, the Annual Action Plans of the DMC for both 2014 and 2015 were approved by NCDM only during the meeting held on 11 May 2015.
2.2b. The NCDM impeded rather than advanced implementation
The irregularity of NCDM meetings has also constrained the ability of institutions such as the DMC to effectively plan and carry out the tasks that are assigned to it.

Section 10 (3) of the DM Act empowers the NCDM to issue a Gazette that instructs every ministry, government department and public corporation to prepare and submit detailed Disaster Management Plans (DMPs), and to specify the time frames for compliance.16 This is expected to be an early step in setting up disaster management preparedness.

‘Every ministry, government department and public corporation shall on or before such date as determined by the Council by order published in the Gazette, submit to the centre, a detailed disaster management plan relating to the disaster counter measures proposed to be taken by such Ministry, Gov department, public corporation, as the case may be, to counter any disaster or impending disaster ’ 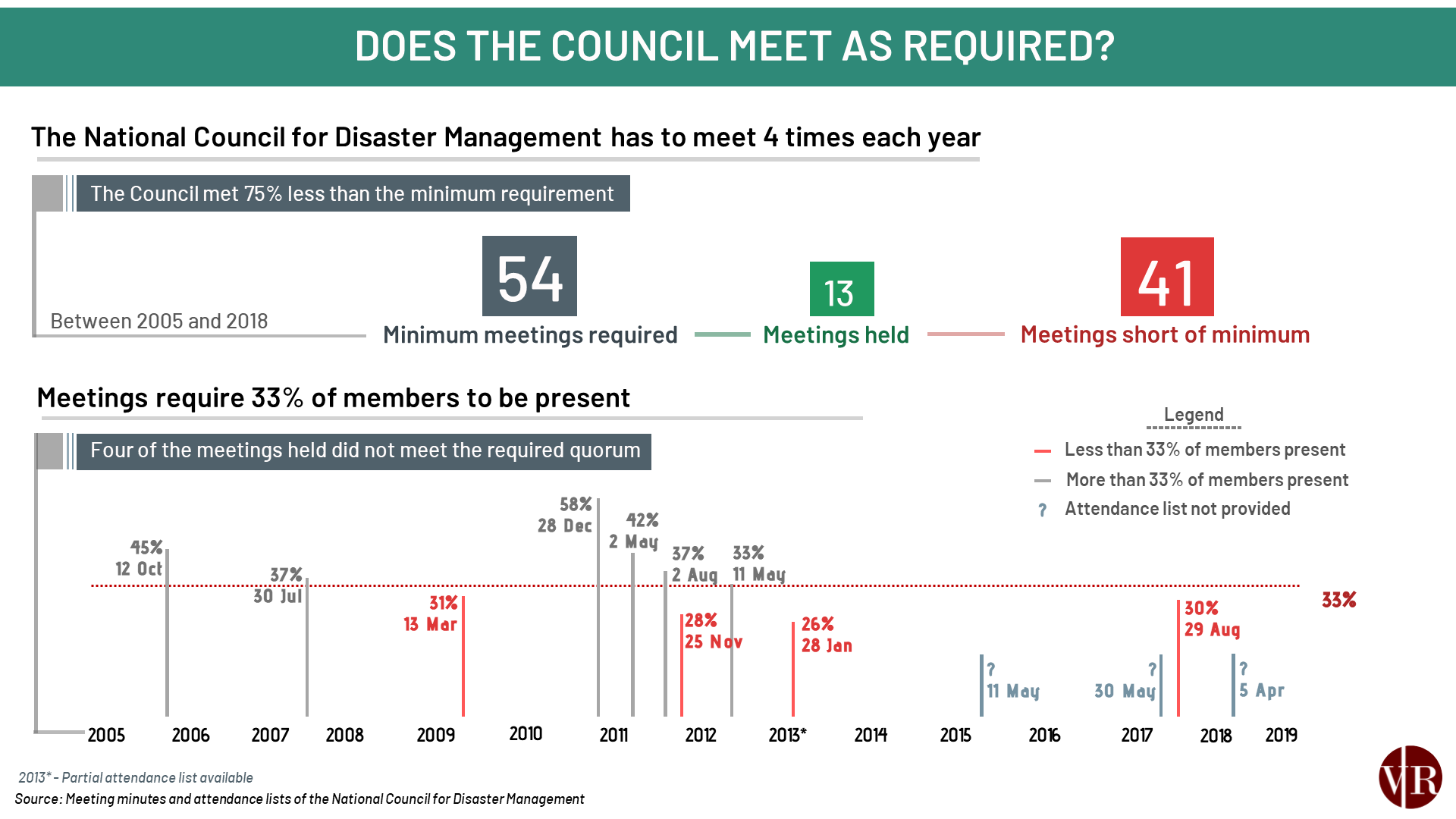 However, since December 2005, almost 14 years into the process, the NCDM is yet to issue that initial Gazette notification to set the process in motion. Therefore, the delays not only to approve, but also to formulate specific, actionable disaster management plans, are again linked to the NCDM’s inaction.

The DMC, in its 2010 Corporate Plan, states that its operations are ‘severely constrained by the difficulty in convening regular meetings of the NCDM as stipulated in the Act.’17 This analysis was also echoed in an outcome- based evaluation of the disaster management programme in 2011 by the United Nations Development Programme (UNDP).18 These observations are consistent with the findings of the RTI investigation summarised in this brief. 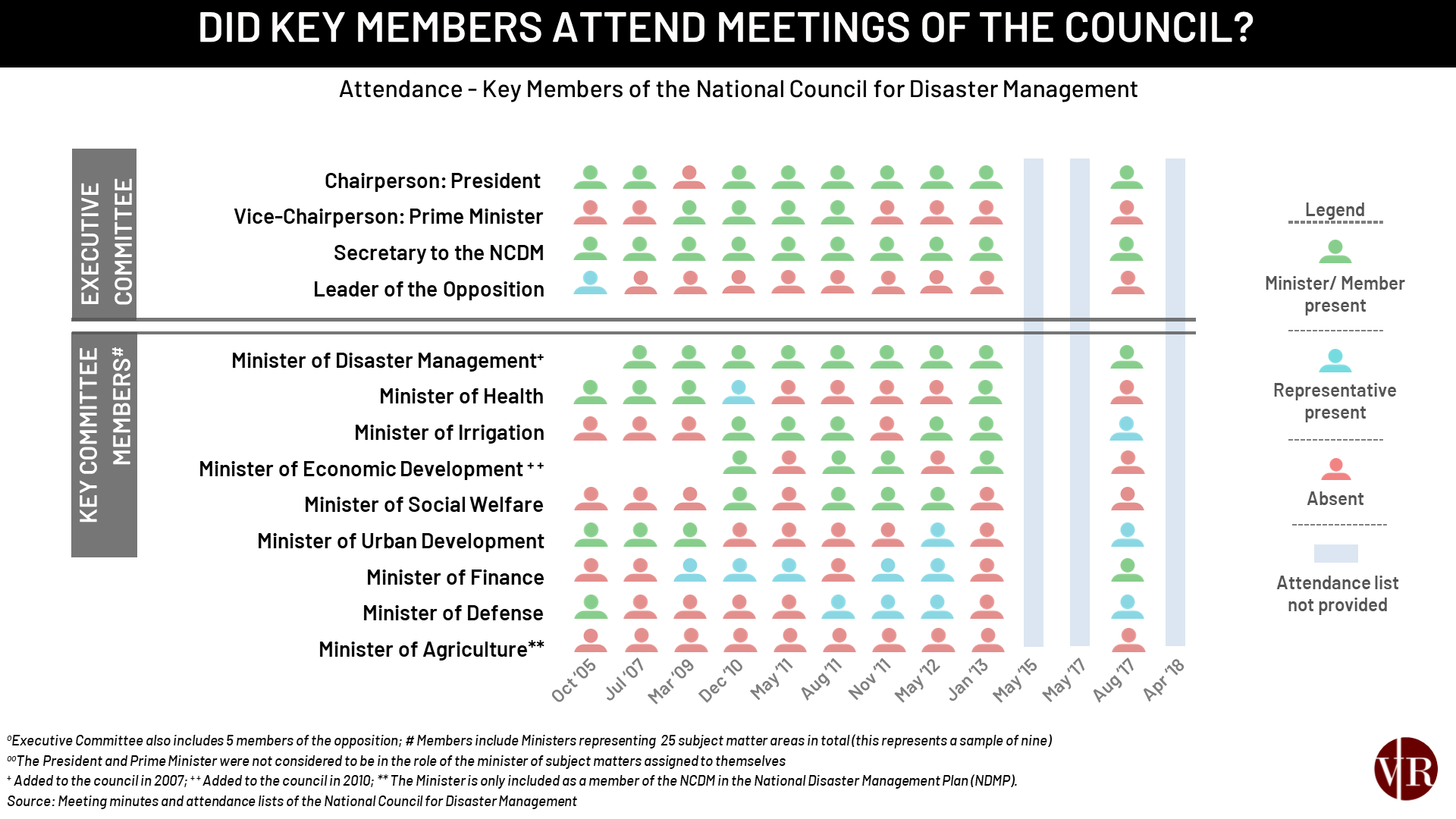 The failure of the NCDM is part of the explanation for why various disasters have been poorly managed, and why the country remains unprepared in the face of even regular, known disaster risks/events. This failure of administration has significant human and economic ramifications for Sri Lanka.

Since 2005, there have been more disasters in Sri Lanka than meetings of the NCDM (refer Annex 4). The NCDM did not convene to make decisions, and neglected critical responsibilities of approvals, directives and oversight. There is a continuing administrative failure to have in place the requisite proactive measures. This keeps Sri Lanka ill-prepared in terms of disaster risk management. The administrative failure creates a situation in which failing to plan disaster management becomes a plan to fail in disaster management. 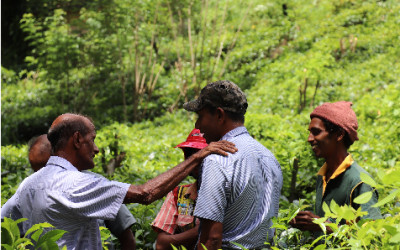